Civil War Swords and Sabres
History of Civil War swords and sabres. Civil War swords of Union and Confederate armies. 1840 Army NCO sword history. Sword history.
The American Civil War saw a dramatic shift in tactics from wars in the past, including the first real combative operations of such as the rifled musket. These weapons, more accurate than the smoothbore weapons to have come before them, spelled the beginning of the end of the edged weapons that had before dominated warfare as fighting moved from close range, melee battle to medium range shootouts and long range artillery duels.

Nevertheless, both Southern and Northern forces were issued with a variety of swords depending on their fighting style; cavalrymen, infantry, artillerymen, marines and officers all had distinct weapons issued to them with the intention, once the initial exchange of artillery and musket fire had abated, of defeating the enemy. Cavalrymen in particular, used to quickly covering ground and attacking enemy infantry from a mounted position, were issued with a variety of single-edged sabres designed for slashing and hacking. However, the American Civil War included advancements in projectile weaponry including the deployment of the first Gatling guns, machine guns that essentially rendered cavalry charges both obsolete and suicidal. Nevertheless, such tactics and the associated weaponry remained the mainstay of western armies until the First World War.

However, edged weapons did not die out so easily. Around about the time of the American Civil War, the sword bayonet was being developed. This 23 inch blade mounted on the end of a rifle or musket turned the slow-to-reload medium range weapon into an effective spear for close range work. Though the sword has gradually lost favour since the American Civil War, the bayonet has been successfully deployed by modern armies right up to the Second Gulf War and the conflict in Afghanistan.

The Model 1840 Noncommissioned Officers’ Sword was based on a German infantry sword used by British troops during the Napoleonic Wars. The sword had a 31-inch blade, a cast brass hilt resembling the more expensive wire-wrapped leather grips, and a leather scabbard rather than the steel used by cavalry troopers and officers. 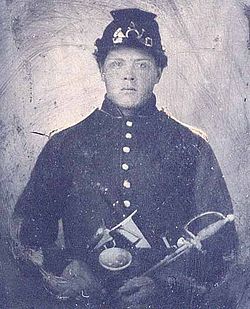 1840 NCO sword was carried by sergeants during the Mexican–American War, and the American Civil War it was worn either on a white or black baldric or with an Enfield bayonet frog. A shorter version with a 26-inch blade was carried by musicians, this was called the Model 1840 musician’s sword. NCOs of shorter stature and cadets also carried this variant.