The medieval sword owes much to the spatha  as it used much of its basic design, it was very popular during the migration period and was often decorated with Germanic artwork similar to that found on Roman coins. The introduction of more advanced technology in the 10th century meant that steel could be quenched hardened and tempered to provide a more consistent high quality. A technique developed on the Indian subcontinent in 5th century BC lead to the creation of Damascus steel and was highly prized as it was not only tough but resistant to shattering and could be honed to a sharp and resilient edge.

In the 12th and 13th century swords began to develop quillions or cross guards which predominantly concerned the shape of the pommel. These swords had to not only cut things but the point of the blade had to be able to counter improvements in armour as the 14th century saw the change from chain mail to plate armour.

During the 14th century swords advanced to a stage where by the handler could use both hands, these swords where know as the hand and a half sword or more commonly known as a “bastard sword”. By holding the sword in both hands a more powerful blow could be struck.

As technology improved further the single edged sword became increasingly more popular and these were commonly found throughout Asia with such swords as the tachi and the katana leading the way.

One handed medieval sword
The most common medieval sword used together with shield or with a dagger. These swords have its origin probably in Roman spatha.
Examples: Norman sword, viking sword. 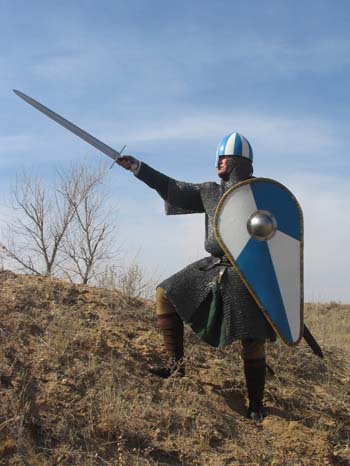 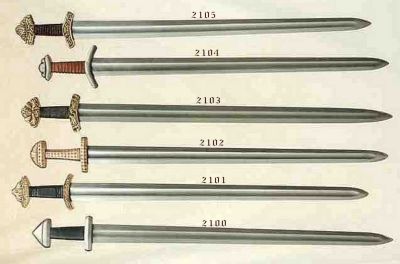 Falchion sword
Special type of a one handed sword with curved axe like axe. Falchions were used by crusaders and medieval knights. Origin of the falchion is probably in farmer tools and knives like origin of English Saxon sword.

Bastard sword
Hand and half sword allowed to use more power. Bastard sword was more effective against armored knights.