The Roman Sword or Gladius is one of the most widely recognized swords of any culture. These swords were in use between 4th century BC and 3rd Century AD. The Romans where highly skilled and disciplined and great weapons such as the sword were a must especially for cavalrymen and infantrymen. The skills of these men and the advances in sword making techniques made this sword a deadly weapon and was one the major factors behind a long and successful military reign. To identify a person’s sword the name was often etched into the blade. 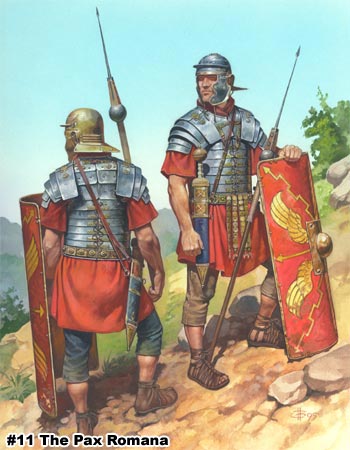 The Romans used all the knowledge they gained from other cultures such as the Greeks and Celts in order to forge these great swords it also allowed them to create a sword for any military situation, examples of this are mountainous regions would require a shorter sword that allowed greater slashing and stabbing, one such sword was the Pompeii Gladius. Another such sword known as the spatha had an extra long reach and was ideally suited for horseback combat.

The Roman sword that really conquered all was the short sword. The short sword had a 20″ double edged blade with a diamond tip and became known as “the sword that conquered the world”. This shorter length allowed a soldier to step inside an enemies guard and thrust the sword in any direction at a deadly pace, this would not be possible with a longer sword and that is where it held the upper hand.

Roman gladius was the primary sword of Ancient Roman foot soldiers. The gladius was shorter than cavalry spatha. Gladius was a stabbing sword.

Gladius was adopted by Romans in 4-3 century BC. Gladius origin can be located in a Hispanic swords. 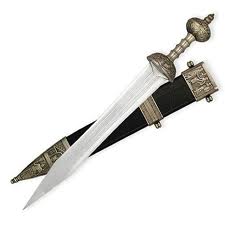 Gladius sword subtypes:
Hispaniensis gladius – the orgiginal gladius imported from today Spain.
Mainz gladius-gladius made for northern wars. The long point was a typical attribute of this gladius type.
Fulham gladius-triangular tip. Fulham gladius was version found in Britain.
Pompeii gladius-the most popular type of gladius sword. This was the shortest gladius with parallel cutting edges and a triangular tip.

Roman spatha sword was a little longer sword than common gladius was. Spatha was a primary sword of Roman cavalry. Spatha was a straight and long sword, measuring between 0.75 and 1 m (30 and 39 in). Spatha was used in Roman wars but of course also in gladiator games. Spatha was adopted by barbarian tribes later and it evolved into early medieval swords – viking swords have origin in this sword type.

Pugio was a sidearm of Roman legionaries. 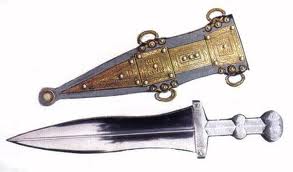